A few months ago I’ve written first post in this series and it seems it’s time to continue the discussion, because things didn’t stop. Not at all.

The investment in configuration, or to be more specific, in automating things isn’t free. It depends on many factors, obviously, and here it was a compromise between what needs to be done and what could be done. In our case automation, configuration management (CM) or whatever in between was the second one. The world wouldn’t end while not having CM solutions on board. Especially here, where we don’t manage a farm of VM’s in a cloud environment and to be honest, where any action could be done manually.

Even though you manage even one simple VM, I’d automate this

During last months we’ve done a lot in case of automation. We’ve also learned a lot, I mean not only the new tools, but the two–words I’d call ‘good practices’ in case of the overall environment management. We manage about 10 VM’s so it’s not much and these are in private University cluster. We’re not clouded with all of its pros and cons, but we try (or apply eventually) some cloud–solutions, e.g. we really value the cattle vs. kittens paradigm (covered in first blog post of this series).

Although we don’t manage big clusters or clouds, we managed some good practices that apply in any environment. We believe that:

Daily work still needs to be done, because automation isn’t a top priority. Having said that, most of the CM–related work we’ve made during spare time. Week after week another components joined to the “automated WALL·E family”. We’ve used Ansible as the CM–tool and I believe personally it was a good choice, because it simply let us do the job. We’ve also introduced a few tools to achieve simple CI and so we added Jenkins, which integrates with our Gerrit to perform code review so each Ansible change has been tested upon staging environment before merge into master branch. Furthermore, for any master branch merge, Gerrit triggered an event and so Jenkins would run production build. The complete process is shown below: 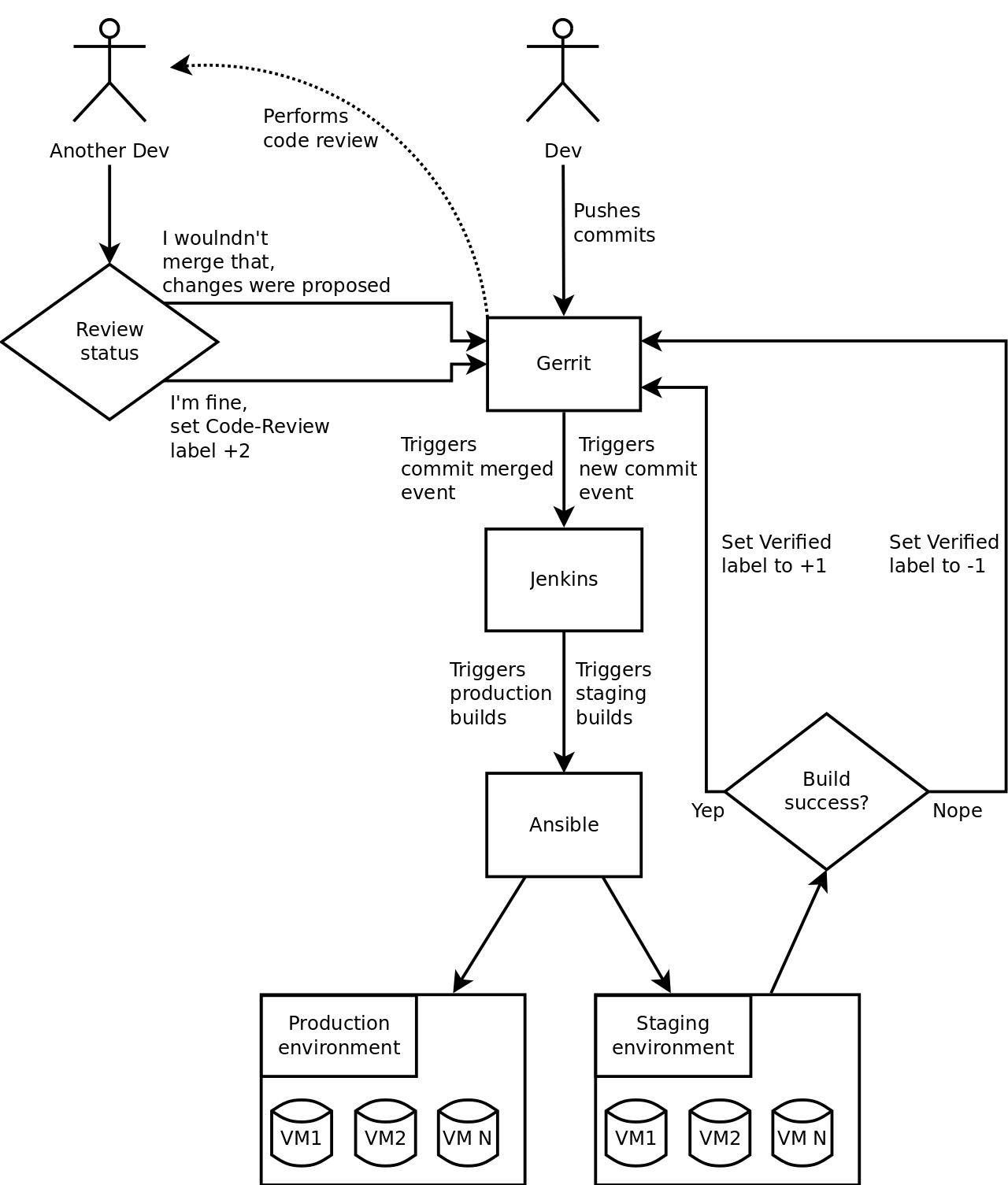 However, running automated things, is so don’t keep dinosaurs

Once you’ve built automated configuration, your environments are no more pets or dinosaurs. They’re easily recreatable and configurable at scale if needed. However, the ‘scale’ word is not necessary here at all. Even having just a single VM, e.g. company developer tools VM, would be a good practice to clean it up and automate, because such VM’s become dinosaurs fast. Once the toolset has been installed, it’s better to not touch it at all, because who would ever remember why they’re exist in a such way.

To give certain examples, we’ve entered automated configuration world and gather profits from: